Prostatitis is known as the inflammation of the prostate gland. The prostate gland is an integral part of the male reproductive system that works to conceal the prostate fluid which is an important element of male semen. Moreover, the prostate gland muscles function proficiently to push the fluid into the urethra during ejaculation. The entire process helps the male in achieving climax during sexual intercourse and further in having a child.

Prostatitis is a common problem in men under the age of 50 and overall, around 10 to 12% of all men suffer from either acute or chronic prostatitis. The nonbacterial prostatitis is the more common one and it causes long-term pain and urinary problems in the prostate gland or other parts of the genital area.

It is very important to note that men that suffer from chronic nonbacterial prostatitis are not at risk of fatality. Having said that, it is essential that anyone that feels any sort of irritation in the gland must get it checked by the doctor. The doctor can use several different types of tests to come up with the root cause of prostatitis and its type. The tests would include semen tests, urine tests, sexually transmitted infection tests, and prostate fluid studies. 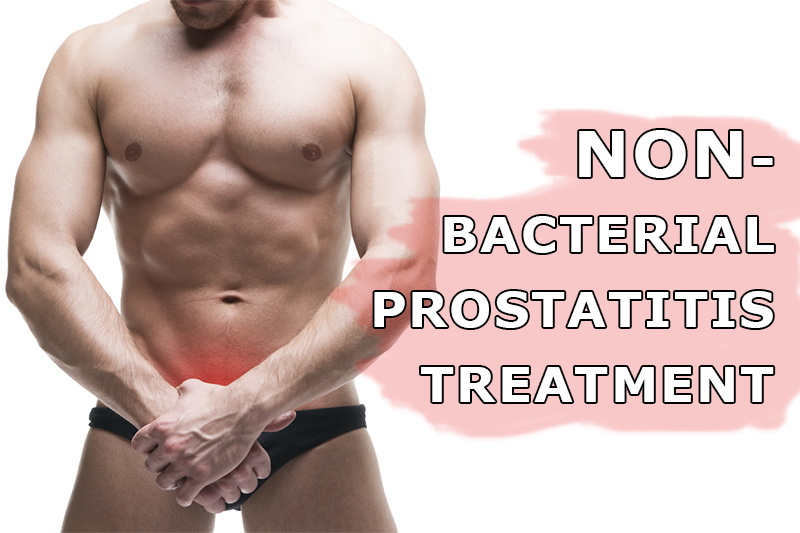 There are two views when it comes to nonbacterial prostatitis treatment. The first view is adopted by doctors that believe in providing medicines, mainly antibiotics to patients as nonbacterial prostatitis cure. Even if it is not caused by infections, there is a possibility of a minor infection in the fluid that was not detected during tests. It is primarily done to be on the safe side and while other treatments are undertaken, medicines are given to support the cause. The other view is of doctors that are not in favor of giving medicines. The reason is that they believe that nonbacterial prostatitis is chronic and would continue to go on therefore giving medicines is useless. They are also right in their approach as when a problem is not caused by an infection or bacterial then the purpose or target of the medicine would be unknown. Hence, making antibiotics useless.

In order to reduce the inflammation of the prostate gland, it is vital that the gland is relaxed or tranquilized. This can be achieved through medication and male prostate massagers. Uvipe.com is one of the top companies that is providing top quality prostate massager that can help in largely eliminating inflammation. Furthermore, there are also antibiotics in the market that help in reducing inflammation or swelling. These can be alpha-adrenergic blockers or nonsteroidal anti-inflammatory drugs.

Treatment for nonbacterial prostatitis can also be conducted through alternate natural remedial such as bathing in warm mater, Chinese acupuncture, learning exercises to relax and strengthen pelvic floor muscle. People can opt for drinking of cranberry juice or extracts or start consuming herbal and nutraceutical medicines. When changing dietary plans, it is worth mentioning that avoiding of spicy food, alcohol, and caffeine can go a long way in rectifying issues related to inflammation. Using a pillow when sitting at home or car can also give the much-needed support to the prostate. Other treatments include using massaging therapies.

All the treatments that are related to nonbacterial prostatitis are focusing on the prostate and genital area. But, through numerous studies, it has been gauged that there is a direct link between depression and anxiety with inflammation of the prostate gland. It is a well-known fact that depression can cause erectile dysfunction, which shows that there is a relation between the mind and the male reproductive system. Therefore, a lot of doctors recommend different treatments to improve mental health.

It is very much agreed upon all the doctors that prostatitis cannot be completely eliminated which means there is a hidden reasoning behind this disease. This could very well be associated with the mind. Seeking counseling and therapy groups is also a great way to getting rid of prostatitis to a large extent. Being happy and in top shape would help anyone in reaching the perfect state of mind. This can help in rectifying many things and one of them is nonbacterial prostatitis.

The aim of the article was to guide people that are suffering from nonbacterial prostatitis or simply wanted more information on the topic. This would help in understanding the causes and one can self-assess their bodies and then consult a doctor in knowing the right solution.

All about penis enlargement